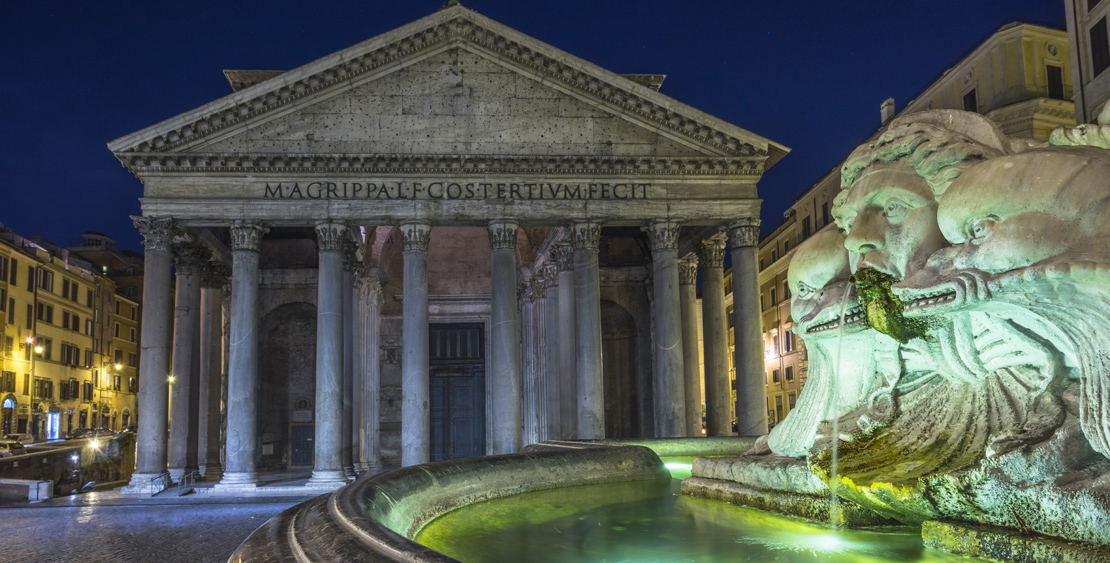 The Pantheon in Rome: history, curiosities and how to visit it

The Pantheon in Rome is with any doubt one of the most fascinating historical places of Rome. The Pantheon is in fact destination of thousands of tourists that come to Rome to see this mysterious building.

The Pantheon: what is it and how it can be visited

Inside the Basilica mass is celebrated on Saturday and in pre-holiday days at 5pm, on Sundays and in holy days at 10,30 am.

Pantheon between history and legend 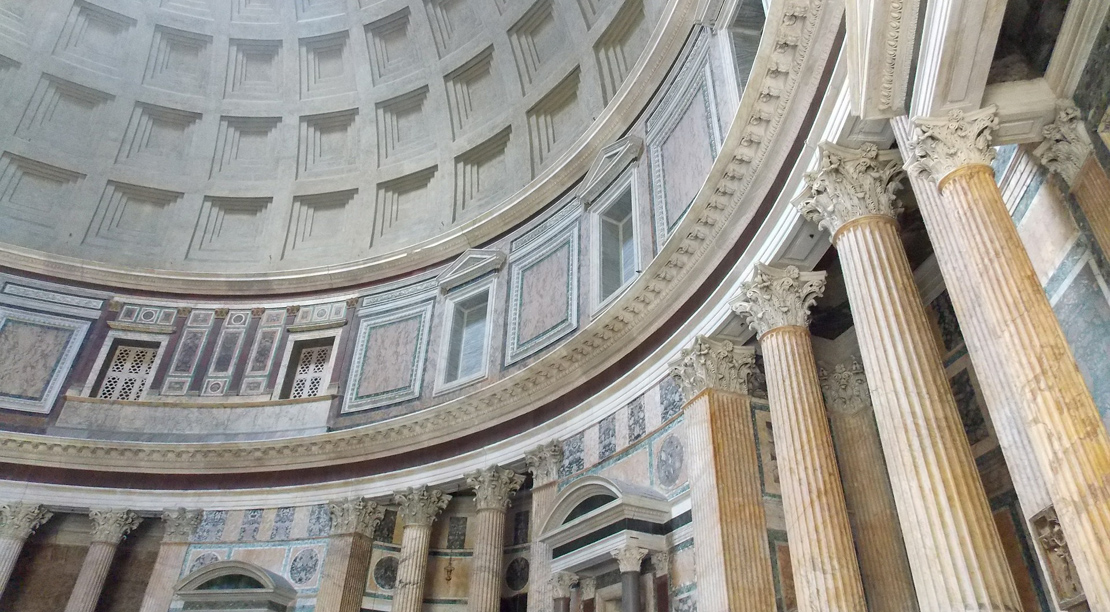 The term "pantheon" derives from two Greek words: “pan” which means everything and “theon” which means divine. In fact, originally the Pantheon in Rome was a temple dedicated to all the pagan deities of Rome.
On the façade, the frieze has a Latin inscription: "It was built by Marco Agrippa, son of Lucius, consul for the third time".
Consul Agrippa, under the reign of Augustus, originally built the building between 27 and 25 BC. After two fires, it was rebuilt in the form it is today thanks to the will of the emperor Hadrian.
The Pantheon carries many ancient legends that still make it the most mysterious monument in Rome, wrapped in legends and mysteries that fascinate all visitors.

One of the most famous legends regards Romolo, the founder of the Eternal City. In fact, it seems that inside the Pantheon an eagle grabbed the dead body of Romulus and brought him to heaven among the gods.

Another legend tells that the famous oculus (the circular opening just at the centre of the Dome) was created by the devil that escaped from the temple.

The shape itself of the Pantheon embodies a set of characteristics belonging to different cultures and worlds, merged in an unexpectedly harmonious and elegant solution. In fact, the Pantheon has elements that recall the taste of ancient Greece, of imperial Rome and typical elements of the first Christian basilicas. Its silhouette on the skyline of Rome is absolutely unmistakable, especially if photographed from above. The front view, very similar to the facade of a Greek temple as the Parthenon in Athens, contrasts unexpectedly with the hemispherical dome roof that overlooks it. The large apse-shaped body occupies the space behind the facade, where round geometric shapes contrasts with the classic linearity of the front.

The interior of the building is equally fascinating. The tromp l'oeil dome with the famous oculus, the 7 splendid niches placed between the Corinthian columns where the statues of the 7 divinities connected to the cult of the planets stay, the richly decorated floor inlaid with polychrome marble, the huge dimension of the structure, the enormous empty space inside… everything contributes to making this building a wonder that leaves visitors enchanted, enraptured and full of amazement.

A last curiosity: the rain does not reach the pavement despite the 9 meters of diameter of the oculus. The explanation lies in the fact that thanks to the special shape of the oculus, an upward current of air dematerialises the drops of rain. The floor of the monument remains dry even when it’s raining cat and dogs!

The surprising structure of the Pantheon 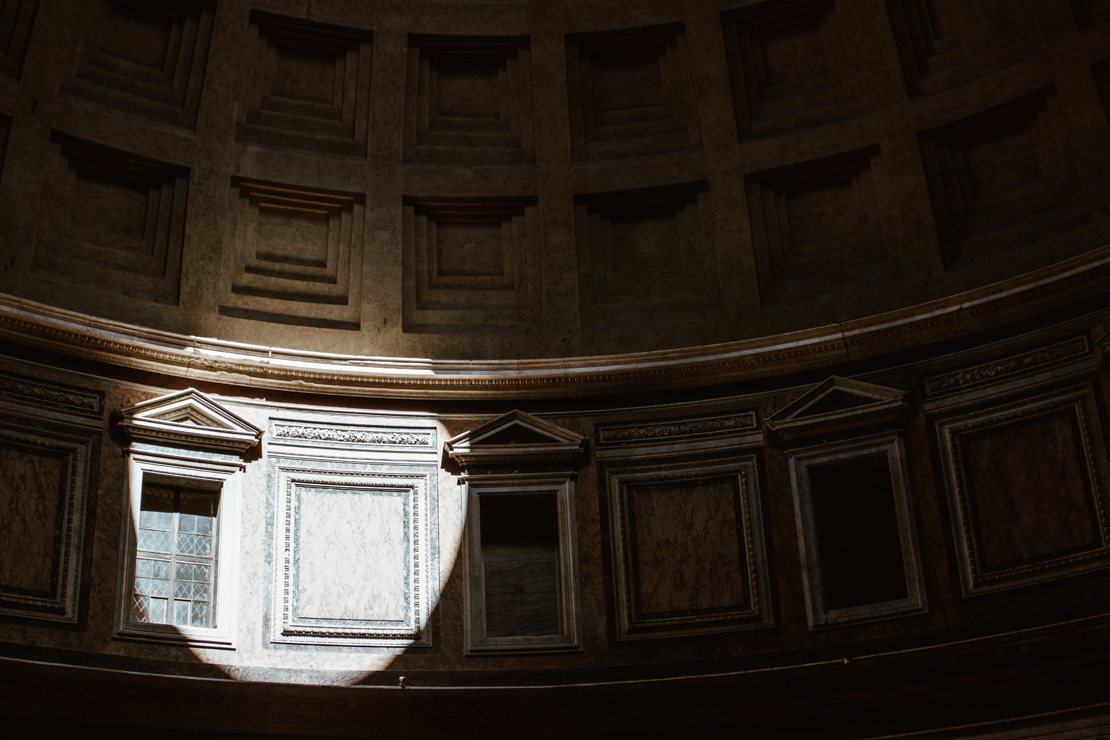 This unique building is composed by a circular structure surmounted by a large hemispherical dome. A portico forms the main façade: Corinthian columns surmount a pediment typical of Greek temples. The dome of the Pantheon is made of concrete and it is opened in the centre. The large hole on the top is called oculus. The light that enters the oculus illuminates the internal environment both during the day and evening, creating a spectacular play of dark light.

The internal space of the monument looks like a cylinder covered by a hemisphere. Along the curved walls there are various niches alternate with columns and pilasters. The large dome is made even more impressive by the coffered decoration that shrinks in size as they tighten towards the oculus.

The construction of the Pantheon dates back to 2000 years ago and it was an engineering masterpiece. The optical effect that gives the viewer is both of an extremely harmonious and imposing building with particularly suggestive light and shadow effects.

Who is buried inside the Pantheon?

The Pantheon is also a place of illustrious burials. Raffaello Sanzio, among the most famous artists, the musician Arcangelo Corelli, the two first kings of Italy Vittorio Emanuele II and Umberto I and also famous politicians such as Agostino Depretis and Francesco Crispi are buried there. 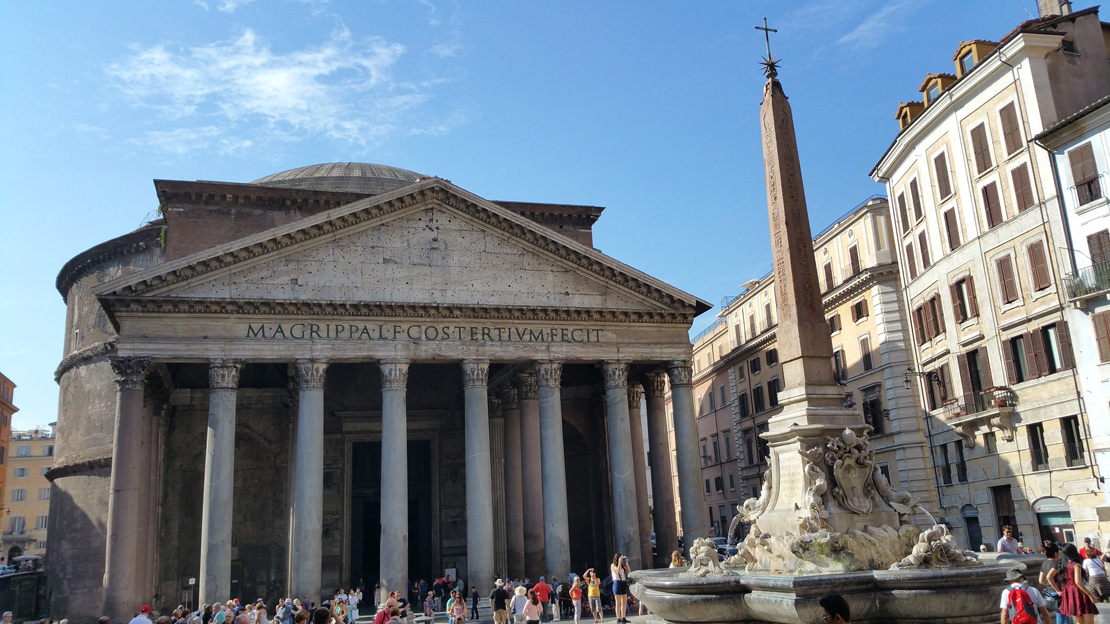 The Pantheon is located in the centre of Rome, in the district (named Rione) Pigna, in Piazza della Rotonda. This square was projected by Giacomo della Porta in 1500.

The Pantheon in Rome – how and what can be visited 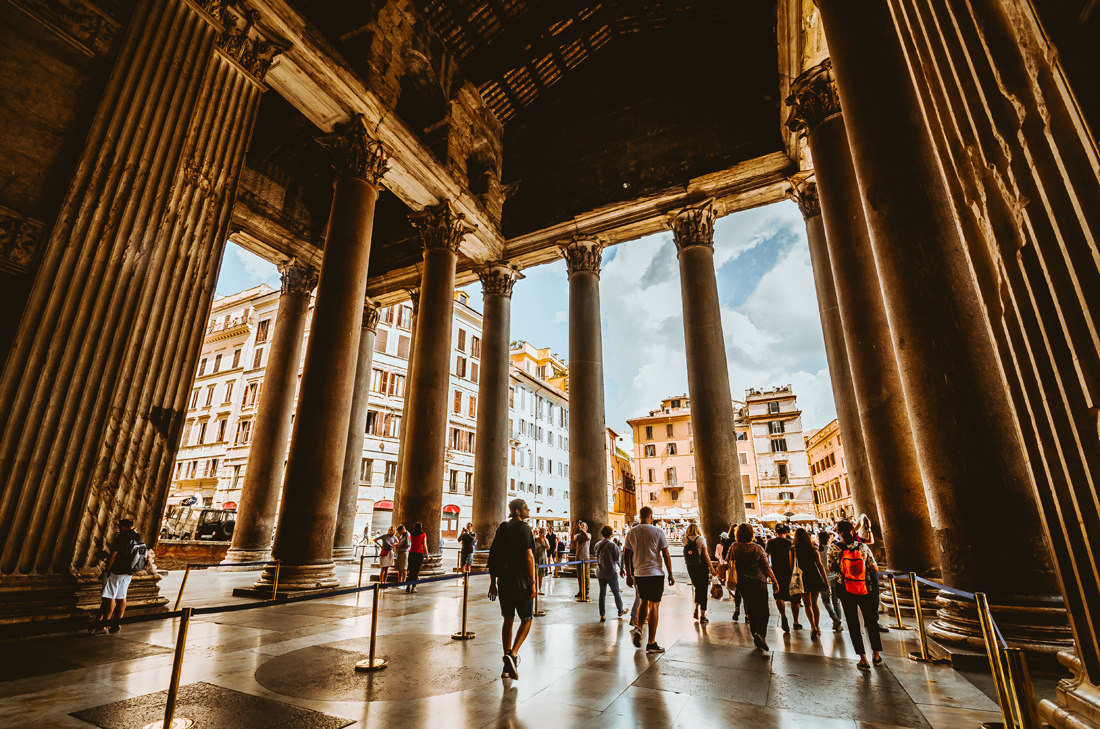 (Photo by Christopher Czermak on Unsplash)

Entrance to the Pantheon is free. However, it is possible to rent an audio guide that costs 6.00 Euro. The audio guide is bookable and available in the following languages: English, Italian, French, Spanish, Chinese, German, Portuguese, Russian.

The explanation lasts about 35 minutes. The explanation of the official audio guide focuses on 15 points of interest of the monument and allows you to explore the Pantheon, its unique architecture and to learn about its fascinating history.
It is necessary to bring an identity document to be left in deposit for the audio guide. The document will be returned upon return of the device once the tour has ended.

Visitors are required to behave in a respectful and appropriate way, wear appropriate clothing, respect silence, do not consume food or drinks, do not introduce animals.

It is also forbidden to take photos and professional filming with a tripod or flash without unless authorized, touching the works exhibited and overcoming the cords that delimit the works inside the Pantheon.

It is possible to organize a guided tour of the Pantheon during daytime, as it is not accessible in the evening. The guided tours can take place in several languages and lasts about 2 hours. It is often advisable to combine it with Piazza Navona, to admire one of the most important and suggestive squares of Rome and to appreciate Bernini's baroque work: the three fountains that decorate the large Roman square. In this case the tour lasts about 3 hours.

Alternatively, the visit to the Pantheon can be combined with Castel Sant’Angelo, which is also easily accessible and takes about 15 minutes on foot.

Pantheon area: what can be visited in the area, services, place to eat

The area surrounding the Pantheon is one of the most lively and atmospheric places of Rome. Bars and restaurants are open until late at night, they make this area one of the best entertainment places for both roman people and tourists during all seasons. The area of the Pantheon, Piazza Navona, Castel Sant'Angelo and the district of Campo dei Fiori are some of the most characteristic areas of Rome. The name of Campo dei Fiori comes from the colourful market set up every day with flowers and foodstuffs.

The cheerful, lively and very characteristic atmosphere of the alleys, squares and fountains that wind through the area make this part of Rome an unmissable stop for the visitors of the city.

Closed on: 1st January, 1st May and the 25th December.