The Trevi Fountain, a must see when in Rome

The Trevi Fountain is one of the most recognizable monuments and tourist site in Rome. This fountain draw thousands of visitors every day with its history, architecture, magnificent sculpture and the serene atmosphere created by the water.

The Trevi Fountain, history and architecture

The Trevi Fountain is one of the numerous products of Baroque art, but the fountain has accumulated more significance and profound meaning over the centuries. With whimsical and mythical sculpted figures drawing attention to the gracefulness of the fountain, the Trevi Fountain has become a unique symbol of Roman art, sensuality and power. 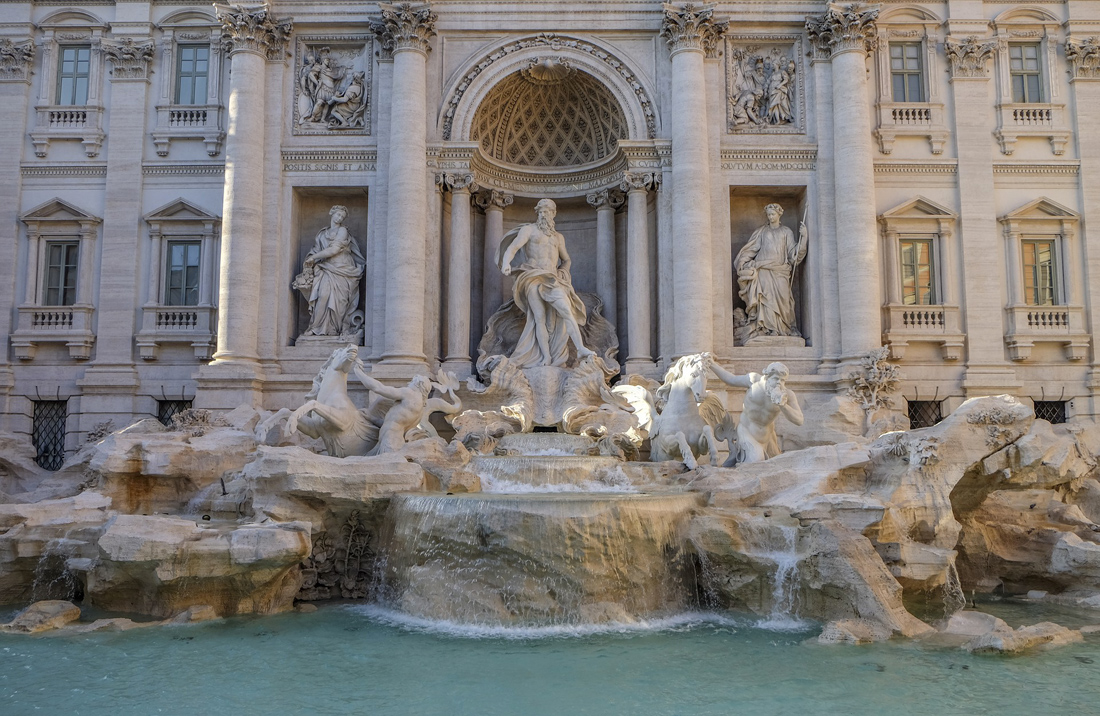 The light and shade effects on the marble make the wind seem to bellow through the drapes of the statues, agitating the waves, creating an extraordinarily intense and spectacular scene. The central feature of the fountain is a chariot in the shape of a shell, drawn by seahorses with Triton as the guide. The Trevi fountain wants to represent a sea scene: it depicts Oceanus, on which sides there are statues of Abundance and Salubrity. Surrounding the main features, the sculptures merge to form a representation of rocks and vegetation.

The fountain, which is designed like a monumental triumphal arch, was built against a wall of the Palazzo Poli. It measures twenty meters wide and twenty-six meters high and occupies more than half the square.

In fact, in the 15th century, a smaller version of the Trevi Fountain had been constructed under Pope Nicholas V. In 1732, Pope Clement XII commissioned Nicola Salvi to create larger fountain in the Trevi Square. While a previous renovation plans had been designed by Bernini from request of Pope Urban VIII, the design was never implemented due to the death of Pope Urban VIII. The statues were sculpted by Pietro Bracci and the fountain was inaugurated only eleven years after Salvi’s death.

The bas-relief on the right captures the moment the Virgin indicates the source of the spring to the soldiers. The allegorical statues in front of the attic symbolize the four seasons. The Coat of arms of pope Clement XII crowns the top of the building. Water flows over artificial rocks into a large semi-circular basin that represents the sea. Every day some eighty million litres of water flow through the fountain. The water is reused to supply several other Roman fountains, including the Fountain of the Four Rivers, the Tortoise Fountain and the Fontana della Barcaccia in front of the Spanish Steps.

A popular tradition associated with the Trevi Fountain wants that the visitor, back to the fountain, express a desire by tossing a coin in the water. It is said that if you throw a coin over your shoulder into the water, you will be sure to return to Rome. An estimated 3,000 euros in coins are thrown into the fountain every day. It is not well-known that the coins thrown inside the fountains are then donated to charity organization.

The Trevi Fountain where it is located an how to visit it!

The Trevi Fountain is in Piazza di Trevi, not far from the Pantheon. From the metro stop of Barberini you can reach the Trevi fountain with a 10 minutes walk. The visitor attempting to get a picture in front of the fountain should have to use some patience as it is one of the most crowded place in the city and dozen of people surround it, unlike we have seen in Fellini’s marvellous movie.

Visit the Trevi Fountain with guide