The Roman National Museum, what to see and useful tips

Crypta Balbi. It is located near the city center of Rome. This site of the Roman National Museum was founded in 1981. Crypta Balbi is composed of a basement ground floor and first floor all of which are made of unique, original archealogical pieces.
The Balbi Crypt originally consisted of a theatre, a four-floor block and a patio. The monument was built between 19 and 13 BC under Lucius Cornelius Balbus, who commisioned its construction. The original theatre had a crypt where people refreshed themselves and drank during breaks from the performances.
Over time, the theatre was partially destroyed and buried by other buildings. Excavation began in 1981, and twenty years after restoration, the Crypt was added to the National Museum of Rome. At the upper floor, visitors can see  an exposition of objects made between Antiquity and the Middle Ages, showing the lifestyle of old Roman citizens. The lower floor is the crypt itself. Here ruins of the excavations are displayed. 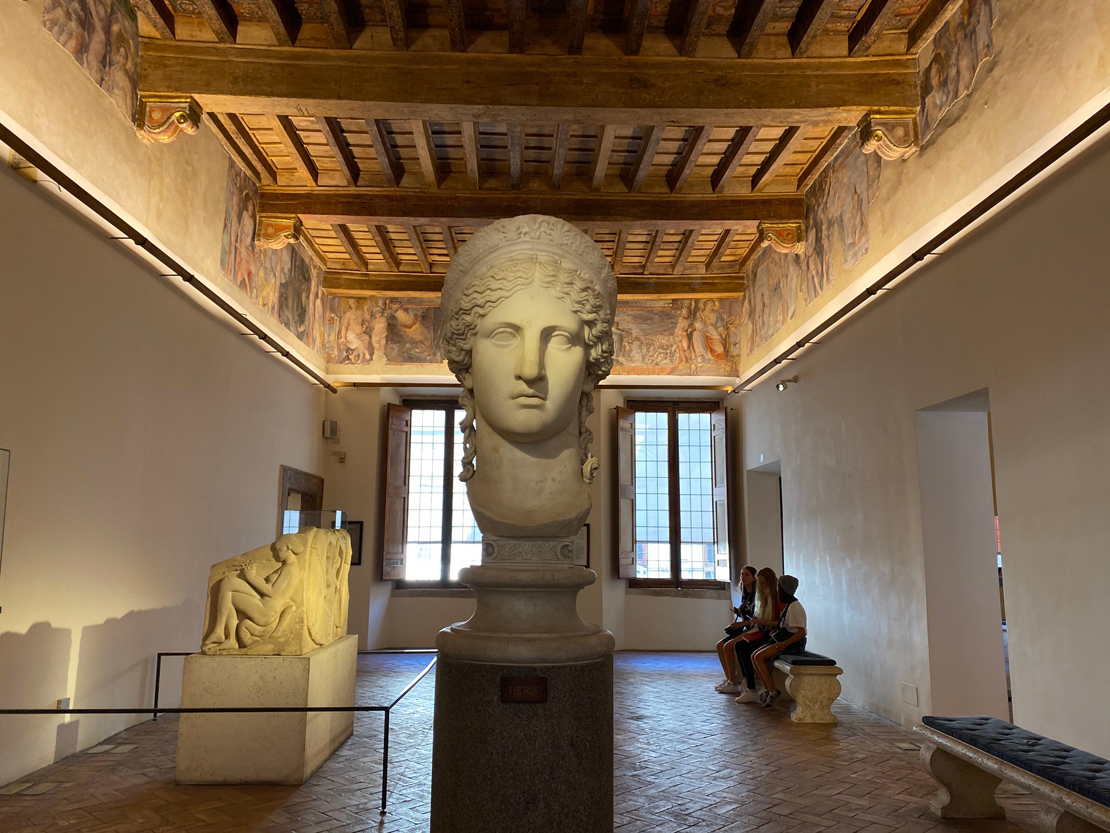 Palazzo Altemps is a sixteenth-century palace situated near the Campo Marzio, an area just north of Piazza Navona. The palace is home to a branch of the Museo Nazionale Romano (National Roman Museum). Since 1997 the museum has been displaying an exquisite collection of ancient Roman statues here, without a doubt one of the best in Rome. The building itself, with a beautiful loggia with painted walls, is a sight in itself.
One of the first important works you'll see are display on the ground floor,. Among them, there is the famous statue of emperor Antonius Pius, the statue of goddess Athena and a statue of Dionysys with satyr and panther. There's also a unique statue of a Dacian, in yellow marble. That one is the most famous of the statues that once adorned the Villa of Ciriaco Mattei.

The first floor, is where the nobility lived. The rooms give a good impression of 16th century palace. Visitors can still admire beautiful wall frescoes and painted and gileded ceilings.
There are numerous noteworthy statues here. One of the most famous is the Ludovisi-throne, which shows the birth of Venus. It was probably made in the Vth century BC in Greece. An other must-see is the Ludovisi Ares, a marble statue of the god of war Mars.

Palazzo Massimo houses one of the best archaeological collections in the world. Also known as the Palazzo Massimo alle Terme due to its proximity to the Baths of Diocletian, the museum building is a great palace built between 1883 and 1887.
On the upper floor, the museum houses the best-preserved Roman frescoes in the world. The frescoes were removed from the walls of the Casa di Livia and the Villa Farnesina and, after their restoration, they reproduce now the original rooms in which they were found. On the same floor iypu can find an impressive collection of mosaics made between the IInd and IVth centuries AD.

The Baths of Diocletian were built in 305 AD under the order of Emperor Diocletian. They are really enourmous,  they have a capacity of over 3,000 people. Actually ther are the largest bath complex in Ancient Rome. Close to the archaeological site of the bathsm you can admire the XVIth century cloister projected by Michelangelo. The construction of the baths began in 298 and finished in 305. The complex occupied a 13-hectare plot of land and included a gymnasium, library, and cold, hot and tepid baths.

Due to the deaths of thousands of Christians that worked on the construction of the baths as slaves, Diocletian was tried and forced to abdicate. The complex remained in service until 547, when it was closed when Barbarians cut off the water supply to the city of Rome. In 1561, Pope Pius IV ordered Michelangelo to build the Basilica of Santa Maria degli Angeli close to the baths' area to honour the Christians who died there.
After 30 years of restoration, the Baths of Diocletian opened to the public in 2008 and became part of the National Museum of Rome. Today, one of the few remaining parts of the remarkable structure can be visited.
In the uncovered part of the baths, it’s possible to walk through a cloister garden where nearly 400 works of art, including statues, sarcophagi and reliefs, are on display.