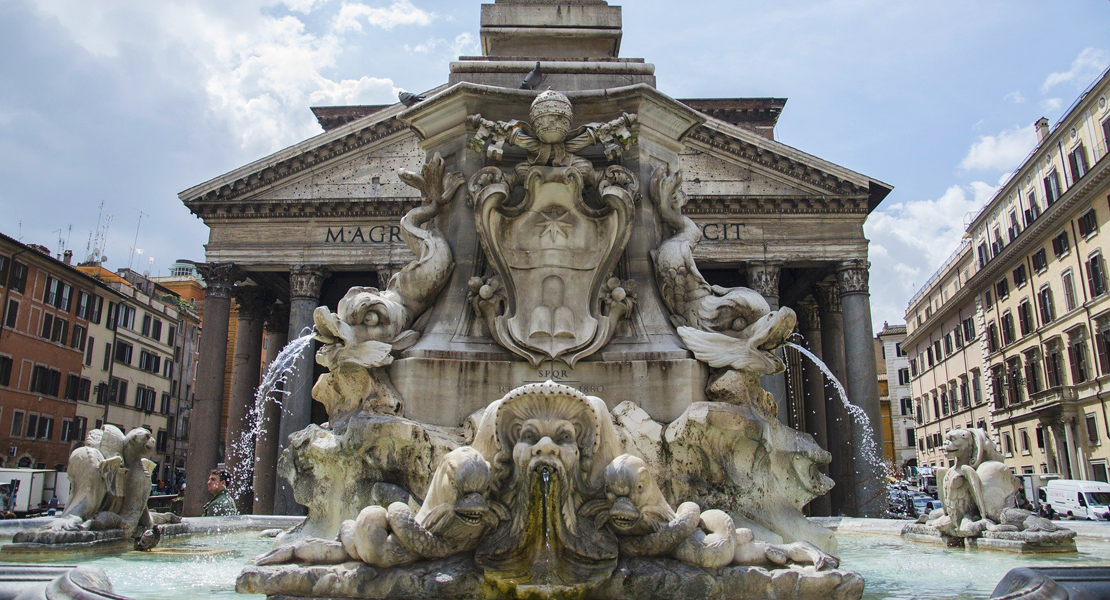 The Pantheon in Rome, an iconic symbol of the Eterna City

The Pantheon is a world-renowned monument located in Rome. This recognizable monument was constructed to be the house of all gods worshiped by ancient romans. This is reflected also in the name of the building, which comes from the Greek and means “all the gods” (pan= all, theos = god). Commissioned by Marcus Agrippa, the Pantheon was further rebuilt by Roman Emperor Hadrian in 126 A.D.

The Pantheon first built by Marcus Agrippa was commissioned to celebrate Agrippa’s third consulship in 27 B.C. The first Pantheon, located on the outskirts of Rome burned down in 80 A.D.

The current Pantheon was the result of Emperor Hadrian who decided to rebuild the temple once again under his reign. The new location of the Pantheon was chosen because it was the location, where Romulus, one of the founders of Rome was swept away by an eagle and brought into the sky among the Gods. The Pantheon was eventually converted into a Christian church by Pope Boniface IV.  Pope Boniface IV consecrated the church to Santa Maria and Martyrs. Converting the Pantheon into a church increased maintenance efforts and saved the monument from becoming a ruin.
The Pantheon is now one of the most recognizable monuments in the world. The careful caretaking of the monument has helped the building maintain its powerful atmosphere and elegant architecture. Visitors not only come to the Pantheon for sightseeing, but they also come to study and admire the marvellous architecture. With its impressively tall and strong columns as well as its brick dome which also happens to be the largest brick dome in the history of architecture, the Pantheon attracts professionals, students and all those who admire architecture. At the top of the Dome there is an oculus of 9 meters, that permit light and air to enter. Rain also enters from the oculus, but it passes though the pavement that presents 22 drainage holes that convey the water outside. The light entering from the oculus has also a mystical meaning: it symbolizes the presence of God that arrives to the men without religious intermediaries.

The Pantheon is a symbol of Greco-Roman architecture. This monument is a significant part of Roman history and a symbol of modern Rome. Located in a lively square with restaurants, bars and shops, the Pantheon is a wonderful destination for all those visiting Rome. The Pantheon is in Piazza della Rotonda, located in a very lively area where you can easily find also a lot of places where to eat. You can reach the Pantheon with the metro (line A) getting off at Barberini, the nearest stop, and then walking for 20 minutes. If you are already in the area of Piazza Venezia, you can also reach Pantheon from here with a 15 minutes’ walk. The entrance for the Pantheon if free, you won’t need ticket.

Book your tour of the Pantheon