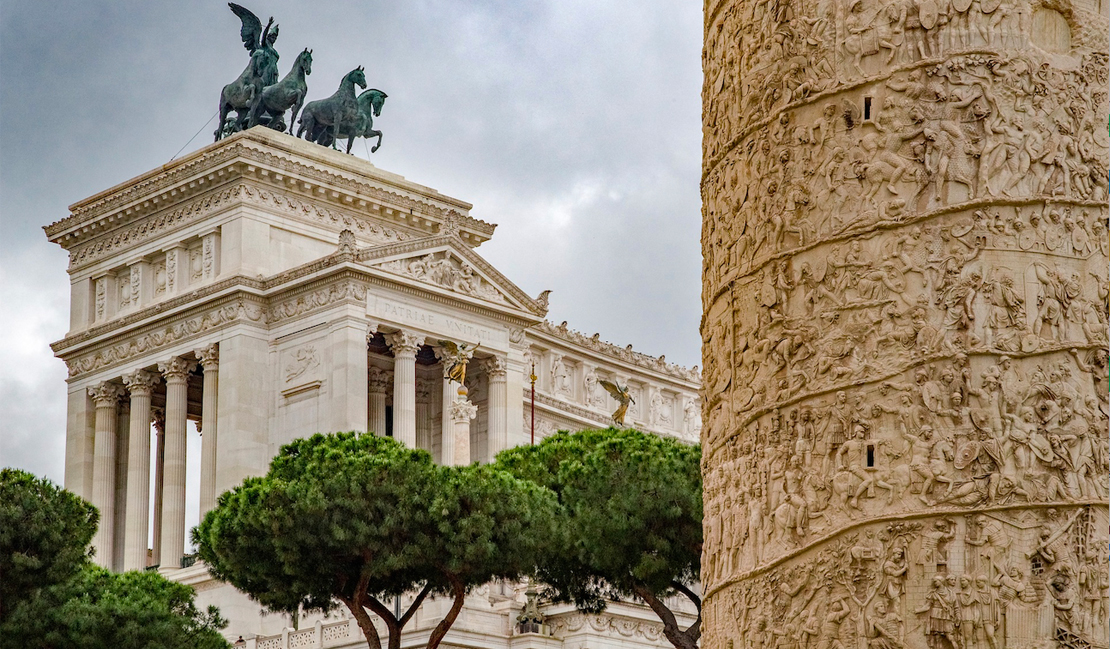 The Column of Trajan in Rome and the Imperial Forums

The Column of Trajan is a unique monument constructed in 113 AD and it consistsof a 100-foot tall marble column set atop a massive rectangular base. It was topped by a gilded statue of the emperor himself.

Marcus Ulpius Traianus, Roman Emperor AD 98-117 was born in about the year AD 53 in Spain, the son of a Consul and thus a member of a noble Roman family. He showed such prowess in military service that he was chosen by Nerva to be his successor on the Imperial throne. Trajan was formally adopted in AD 98 by Nerva, who then promptly died and left the not-so-young man as emperor. He didn’t disappoint the expectations, in fact only three years later Trajan embarked on the first war against the Dacians, a fairly highly civilized Germanic 'barbarians' who lived across the Danube in the area of modern Romania.
The Dacians were led by the intelligent and skilful Decebalus, who made the war hard for the Romans. Trajan and his army were victorious, and he returned to Rome the next year to celebrate a fine triumph and to receive the award of the title "Dacicus."

Trajan realized further conquests later in his reign, but it was for the Dacian wars and his subsequent grand building projects in the Eternal City that he is most remembered - and rightly so. Trajan returned to Rome with a vast quantity of war booty, which he proceeded to spend in great style.

The Column of Trajan today

The Column of Trajan was a unique monument constructed in 113 AD and it consisted of a 100-foot tall marble column set atop a massive rectangular base, topped by a gilded statue of the emperor himself. Columnar monuments, although smaller in scale, were not new to the Romans; there were three things, however, which made this monument particularly new: the chamber carved in its base designed to house Trajan's ashes, the spiral staircase which wound upwards to a viewing platform at its top, and the continuous sculpted frieze which decorates the exterior of the column. These carvings depict the events of Dacian wars, with an apparent accuracy of detail that has led some scholars to speculate that they were modelled on a war commentary written by Trajan himself. The scenes cover the entire range of Roman military activity, from fighting to collecting food, from marching to the built of fortifications. They also show many details of the land the Romans passed through, so that the enemies they fought.

The base is covered with detailed carvings representing war trophy of the defeated, the Dacians. The carvings which cover the Column itself, though easily accessible today with photographs, would have been very difficult, if not impossible, for an ancient Roman spectator to appreciate in full. From ground level, only the lowest spirals are visible in detail. The observation was made even more difficult from the small size of the court in which the column was placed, that did not allow people to step very far back from the monument, increasing the difficulty of viewing the upper spirals. To solve this problem, it was proposed that the roofs of the two flanking libraries could have been used as viewing platforms.

The Column of Trajan, where it is located and how to visit it

Today, the Trajan’s Column draws tourists from all around the world and it remains one of Rome’s many treasures as it is artistically unique for its time. The Column is well visible from the part of the street that coincides with the end of Via dei Fori Imperiali, just before Piazza Venezia.
We suggest you to reach it from the Colosseum though Via dei Fori Imperiali, so that you can walk and enjoy the marvellous sight of the Forum from the street, before finding the Column on the right. You can admre the Trajan's Column entering the Trajan's Forum. You can have access to this archaeological area booking the Forum Pass ticket.